...maintain your quality of life.

...maintain your quality of life. 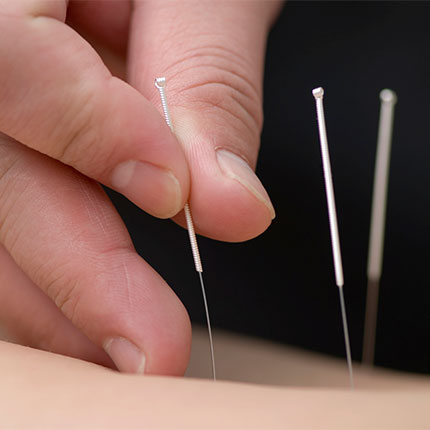 Acupuncture is an ancient form of Chinese medicine involving the insertion of solid acupuncture needles into the skin at specific points on the body to achieve a therapeutic effect. No drug is injected. The needles alone create the beneficial effects of acupuncture.

Acupuncture is used to encourage natural healing, improve mood and energy, reduce or relieve pain and improve function of affected areas of the body. It is safe and effective and is often successfully used as an alternative to medications or even surgery. Relief is often obtained with acupuncture when traditional medical therapy has failed.

The needles are very fine, flexible and rounded but sharp at the tip. They are 'atraumatic', meaning that they do not have a cutting edge like a hypodermic needle, which slices through tissue. Their design allows acupuncture needles to slide smoothly through tissues and makes them unlikely to cause bleeding or damage to underlying structures.

Acupuncture points (also referred to as 'acupoints’) are places on the skin that have a lower resistance to the passage of electricity than the surrounding skin and are part of a network of points that were mapped centuries ago by the Chinese. Most are found along 'meridians’ or 'channels’ that are believed to be the pathways by which energy or Qi (pronounced 'Chee’) flows through the body. Acupoints are located either by identifying anatomical landmarks or by the classical method (for example: "the point where the middle finger touches the thigh when standing at attention").

A dull, heavy, or aching feeling often occurs when the needle is correctly placed. This is referred to as 'de Qi' and is considered by some traditional acupuncturists to be necessary for acupuncture to be effective.

Acupuncture
Chiropractic Care
Massage Therapy
Orthotics
Physiotherapy
Shockwave Therapy
Ready to live pain-free?
TAC Physiotherapy can help you get more out of your life, we have been helping people in pain for over 20 years.
Contact Us